My darling husband was my date to the book signing on Thursday night. This was definitely not his thing, but he must love me a whole lot because he agreed to go with me without a fight. The signing started at 6:30pm so I told him we should leave around 5:45 so we could get there right on time and be towards the front of the line.

To help show my appreciation to Alex, I decided to make a good dinner that would be ready right when he got home at 5 (what up senior citizen eating time!). We love to eat dinner tapas style sometimes, so I went off that and did my own take on a recipe I saw Paula Deen make on her show on the Food Network.

Here’s my version of  Eggplant Caprese: 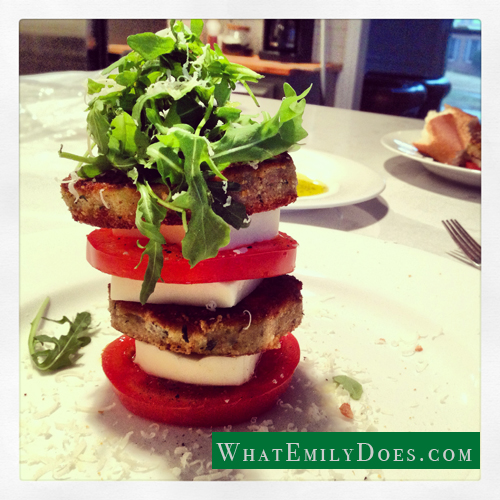 It was ALMOST perfect.  I learned the hard way that Romano cheese burns easily…so don’t use it in your bread crumb mixture.  Other than that, delish!

We got to FLOR in Atlanta around 6:15pm. The number of people that were already there was way beyond my expectations.  I was thinking a couple hundred people would be there throughout the night–WRONG. John & Sherry have quite the following!  I guess since I’ve never gone to anything like this I was just really shocked by how many people come out.

As we stood in line it got colder an colder outside.  I began to wonder what in the world I was doing standing in the cold just to get a signature in a book…what was I, a fan girl drooling over Justin Bieber?  But alas, my sweet husband didn’t complain one bit. 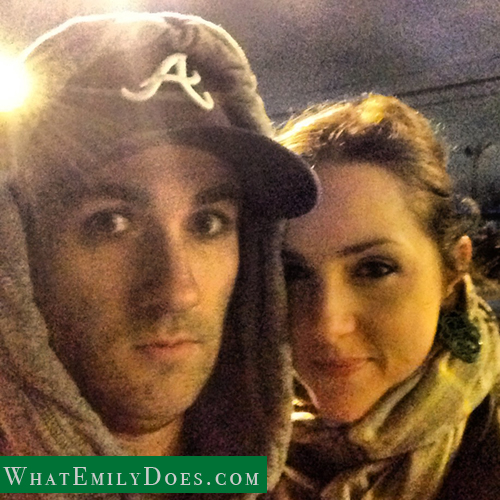 He didn’t complain, but he looks a bit petrified in this picture.

Around 7:30pm we finally got to the door and were allowed in.  The line for the book signing was actually very fast.  Once we were inside and thawing out, I signed a guestbook that John & Sherry had sitting out and then went up and had my book signed.

I don’t think it was being “star struck” or anything like that, but I all of a sudden realized how weird this situation was.  I’ve followed their blog for 2-3 years so I feel like I “know” them, but obviously I don’t, nor do they know me. Then there was the–“Hey, I’m the Emily from the kitchen you featured last week…”  How do you say that and not feel awkward?!  I’m just glad there’s no video of said awkwardness. It was award winning. 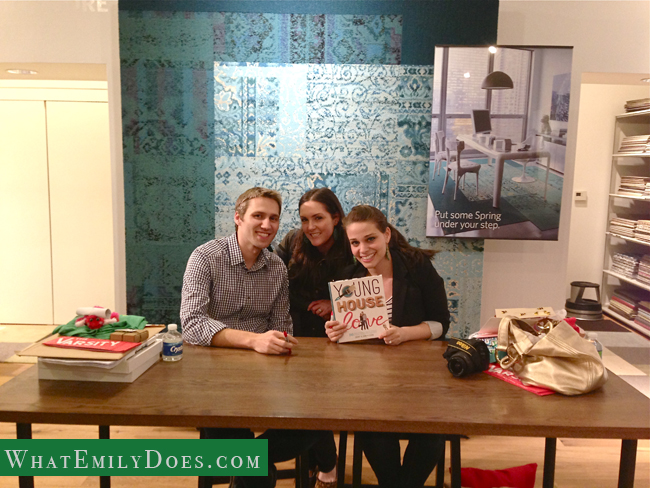 Did I mention that when the picture was about to be taken, John said “you can come a little closer” (I guess I was standing far back??) and I responded with “Oh, okay.  I’ll squeeze in a pretend like we’re friends.”  Annnnnnd Emily sounds like a condescending jerk.  It’s my specialty. 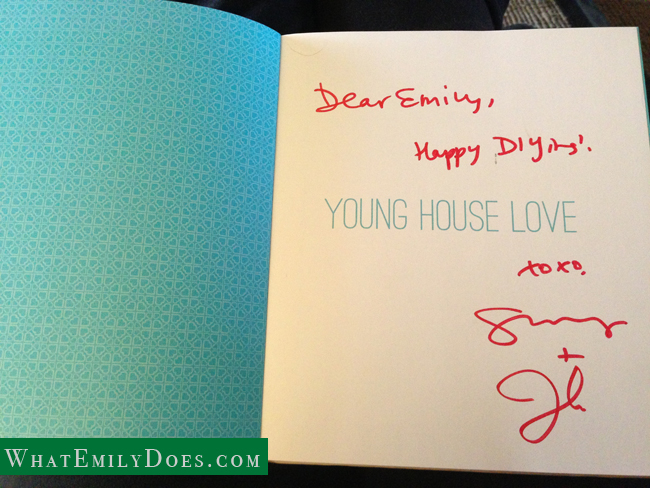 Can you believe that they write little notes in everyone’s book?  I was shocked by that because there were literally about 1000 people there and I can’t imagine how sore their hands must get!

I will say that they were very genuine and as sweet as you would expect them to be.  What a neat life surprise to start a blog, have it grow to be crazy successful that it leads to a book deal, and then you get to see many of the faces that read your blog.  I can only imagine that it was a very surreal experience for them both.

FLOR was a great host for the signing. They had beer, wine, & some delicious looking desserts that were passed around.  They also had a cute Photo booth set up for whoever wanted to partake. 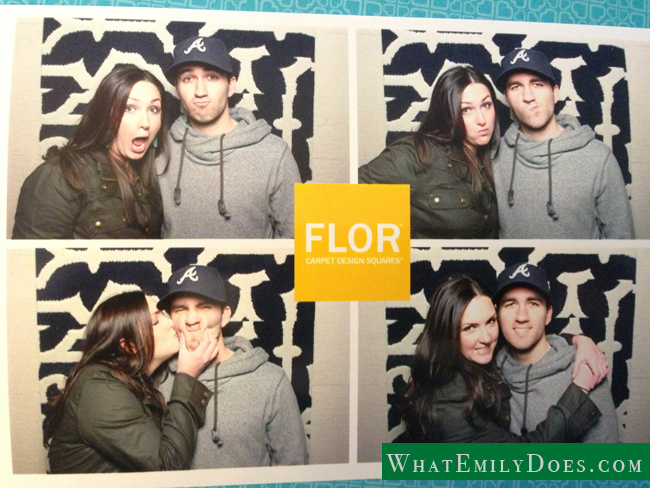 There was also a huge line to chat with Katie Bower, and although I’d love to meet her someday since she lives locally, I wasn’t about to make Alex wait around for that.  He did what he committed to do (and more!) and it was time to get him home.

So, my takeaway from the book signing is that I get awkward when I don’t have time to sit and get to know someone.  I hope it’s a while before Awkward Emily shows up again:)