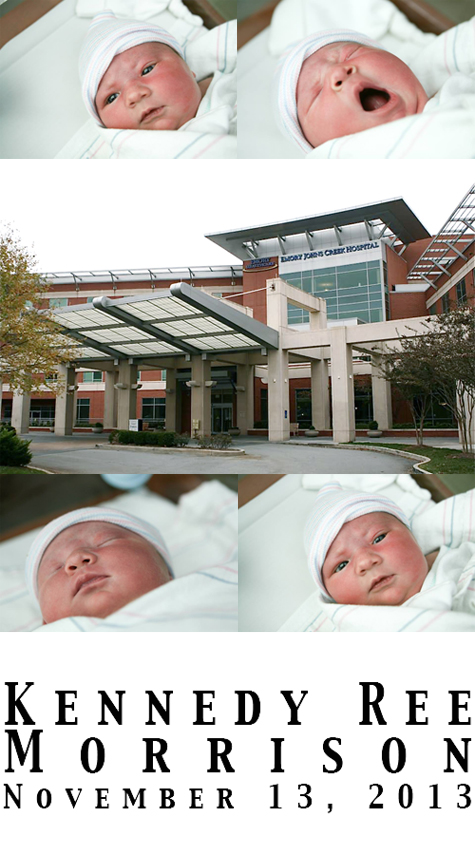 Kennedy was born on November 13, 2013 at 7:31pm weighing 8lb 15oz and measuring 20 3/4″ long. She was busy in my stomach growing a head full of dark hair, and all of the FIVE GUYS Burgers & Fries she craved showed up on those chubby cheeks of hers!

I have had many people ask about my natural birth experience with her, so I’ve decided to just write the whole long, drawn out story down for memory’s sake. Seriously, this is going to be LONG.  If birth stories, and all the details that come with it, are not your thing, please do yourself a favor and stop reading now!

On Tuesday, November 12th, I had a regularly scheduled appointment with my OB/GYN.  I was due two days later on the 14th and had been dilated to 4cm and 80% effaced for two weeks at this point.  I was examined per usual and nothing had changed since the week prior.  Still 4cm dilated and 80% effaced.

The doctor told me that it is their guidelines to not allow the mother to carry past 41 weeks.  My goal this entire pregnancy has been to deliver Kennedy without any medical interventions–no epidural, no induction, no c-section so long as the baby appeared healthy and in no distress.  Since the 41 week mark was only 9 days away I began to get worried about being induced.  I really, really didn’t want it to come to that, so when the doctor mentioned stripping my membranes I gave it a few minutes of thought and asked her quite a few questions about it and then agreed.

I was so fearful about having my membranes stripped because so many friends have told me about their extremely painful experiences.  Sitting on the table in the cold office I was so nervous, then I just laughed out loud–if I couldn’t handle this then how would I be able to handle childbirth?!  So I decided now was a great time to practice my focal point breathing—stare at a spot on the ceiling & breathe slowly.  You got this, Emily.  Then it was over.  It didn’t hurt one bit.  Huh?  I was so confused and halfway thinking she must have done it wrong.

I left the office feeling perfectly fine and headed to grab some lunch up the road to take to my friend Cami who happened to be in the hospital waiting to deliver her little girl.  As soon as I got to Cami’s room I started cramping.  I’ve never had bad cramps in my life, so I was certain that I was just being a baby, but after about an hour I told Cami that I wanted to go home and get some rest.  I just wanted to curl in a ball on the couch with a heating pad and nap.

By bedtime I was still cramping, but not like before.  Thankfully they had eased up some and I quickly fell asleep.  I remember waking up once during the night with a contraction that was pretty painful, but I figured if it was anything real it would wake me up again shortly, so I just fell right back to sleep.  I slept until 8am and figured the membrane stripping just didn’t work.  What a waste of a painful 12 hours that was.

The only thing I wanted to do was lay on the couch and watch a movie.  The cramping was just annoying and took away any desire for productivity.  I knew that laying down was not the best thing to do if I wanted any chance of going in to labor from the membrane sweep, so I decided to go to the mall to walk around since it was about 30 degrees outside that day.

I walked through Macy’s looking at baby clothes.  It was a good distraction, temporarily anyways.  I was moving slowly, but moving none the less. Next stop was JCPenny’s, but not before using their restroom first.  You know, because being pregnant means peeing every hour.  As soon as I walked out of the restroom I had a feeling of…doom? fear? anxiety?  I don’t quite know how to explain it.  The only thing I thought was “coming here was not a good idea”.

I called Alex and started to cry. Yes, I’m the huge pregnant lady walking through the mall on her cell phone wiping tears that won’t stop falling down her cheeks.  “Hey–I’m at the mall and I feel awful…..it’s just these cramps.  They’re non-stop.  I think it was a mistake to come here.  I think this might be labor….I started timing them and they’re about every 3 minutes….”.  In my head I was thinking “he should come home now” but I could never bring myself to say that because I was just not convinced that it was real labor.  He has a meeting that afternoon and I told him to just come home after that…”don’t rush”.  Don’t rush?  What was I thinking?

I went straight home and figured if this was labor then I should probably eat something so I’ll have energy.  I ate waffles that morning (syrup was like crack to me!) and figured that wouldn’t hold me over, so what other easily digestible option is there than blue box kraft mac n cheese.  I know, my nutrition this day was superior. I boiled the water and threw in the noodles….then started literally sobbing.  I don’t think I’ve ever cried like this by myself.  I paced around the downstairs and forgot I was cooking noodles–this lady has officially messed up cooking pasta! It was complete mush by the time I got back to the pot, but I had no appetite anyways. I was scared.  I was hurting.  I, more than anything, just didn’t want to be alone, but I didn’t want to interrupt Alex’s day either for no reason.  During my sob fest my phone rang. It was my mom.  I answered with a shaky voice and her immediate reply was “are you crying?”.  I had text her earlier about those pesky cramps, so as soon as I replied with a ‘yes’ she said she was coming over.  She got here within 10 minutes and I was upstairs in the nursery, rocking, with a heating pad on my stomach. (FYI–I got this aroma therapy heat/cold pad as a present and didn’t think much of it…it ended up being my FAVORITE gift and I used it throughout my labor and for weeks after Kennedy was born.) 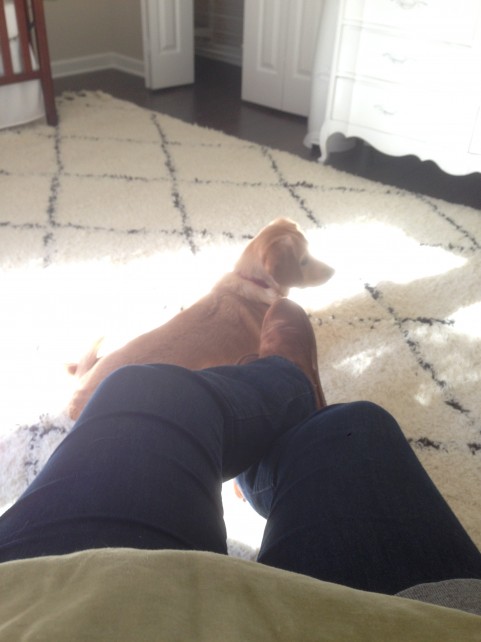 By the time my mom got here I had been officially timing my contractions for about 40 minutes, but I knew they were just as consistent for at least 2 hours prior to starting to time them.  She insisted I call my doctor and to call Alex and tell him to come  home.  I couldn’t do it.  I could still WALK AND TALK through the contractions!  I didn’t want the doctor or nurses to think I was dumb, or a pansy who shows up to L&D barely in labor.  You think I can be a little hard on myself?  I think it’s something to do with being a nurse–I’m a nurse and I had NO desire to be a patient.  None. Like, not at all.  I like to be in control, not the helpless person in a bed hooked up to a monitor!  That’s for the other people…not me. A bit of a control freak?  You could say that.

Okay, back to the story–my mom convinced me to call the doctor because she said that maybe I could just go to the doctor’s office to get checked and see if I had progressed any.  That I could deal with.  It was a much better option than going to the hospital.

Me: Hi, this is Emily Morrison. Dr. Chua stripped my membranes yesterday and I might be in labor.  But I’m not sure.  I don’t think I am, but I’m just not sure.

Me:  Oh, no. My water has definitely not broken.  I have been having contractions that are about 4 minutes apart (they were 3min apart…why did I lie???) for a couple of hours though.  I was just wondering if I could come in to the office and get checked?

Receptionist: Oh, Emily!  Okay…hold on a second……….Emily, Dr. Anthony said you need to go straight to the hospital. She said you were already 4cm and you should go now.

Me:  I know, I’ve been that way for a couple of weeks though.  And I can still WALK AND TALK through the contractions, so I’m just not sure this is it.

Receptionist:  I know, but she says you really need to go.

So that was it.  I was going to the hospital.  Feeling like a complete fraud, I called Alex and told him to come home then I finished packing my bags.  I was a bit annoyed at this task because I knew I was going to come straight back home and have to unpack all of my toiletries, chargers, etc.  It took Alex an hour to get home because he went out to lunch with co-workers and carpooled with someone else, leaving his car at work.  After all, I repeatedly told him “don’t rush” “no hurry” just an hour before.  Once he was home, though, it was GO TIME.  I could see it on his face–he meant business.  His job was to get me to the hospital!

Once we got to the hospital at 2:30pm I had indeed progressed a little to 5cm.  That was it, I wasn’t going anywhere…I was going to have a baby!