Alex and I had a massive fight Monday night over absolutely nothing.  I think I got mad at him because he said he wasn’t mad at me.  Makes sense, right?

Monday night was also the last night I had to take the dreadful Prometrium (progesterone) that will make me start my cycle so I can FINALLY go back to the doctor and get my blood work going and other imagine tests done.

So today I was at work and had just finished lunch while I was waiting for the next patient to show up for his appointment.  I had a brief flashback to the night before when I thought I felt a little…off.  Nothing crazy, but just slightly off.  I decided now would be as good of a time as any to just take yet another pregnancy test.  So off to the bathroom I go….pee…dip the stick…WHAT?! Uhhh…is that the control line?  No, THAT’S the control line!  What’s that other line?  Oh my gosh…it’s positive.  It’s positive.  It’s positive.

I washed my hands as fast as I could, ran back into my office, and immediately called my gynecologist: “Umm, hi. This is Emily Morrison. I finished taking all my Prometrium pills a couple of days ago, then I took a home pregnancy test today…and, um, it’s positive.” The sweet nurse on the other line sounded hesitant, but also happy. I’m sure they get many people with positive pregnancy tests and various other WOMEN’S HEALTH PROBLEMS that just don’t always make it to full term, so I appreciated and understood her reserved manner. “Well Emily, we’ll want to bring you in to do a blood test. Can you come in tomorrow or Friday?”

“Can I come right now?” I immediately shot back.  “I can leave work this very second and be there in 30 minutes.”

The nurse quickly agreed and said to come on in.  Whew!  There’s no way I could have waited an entire DAY to get the blood work done!  I immediately called my manager and kindly asked her to take over for the last patient because something urgent came up and I just needed to get out of there ASAP.  She kindly agreed and I rushed my butt across town to RBA in 30 minutes flat.

Blood was drawn but it wouldn’t be resulted until tomorrow afternoon.  Shoot!

Okay, well now I need to figure out how I’m going to tell my husband!  I drove my silly self to Atlantic Station since it’s was the closest shopping I could think of, and searched that place for a cute newborn baby outfit.  Maybe that’s how I could tell Alex that we’re pregnant!  Well, apparently Atlantic Station has no stores with baby clothes.  Except for Old Navy that is…but there picks were very slim. Next stop, IKEA!  Maybe I could get something nursery related!  That could be fun! Nope, I left empty handed.

I’m in such shock that I just don’t know what to do, so I just drive home.  I sit.  I wait.  I want to call Alex and tell him to come home early, but then again maybe not.  I don’t want to give any sign that something is up.  But honestly, pregnancy was the last thing on either of our minds because it was “impossible”.

I got sick of waiting and kept questioning myself…”Emily, are you sure you did the test right?”  Never mind the fact that when I worked in the ER I did a bajillion identical tests every single shift.  But I doubted myself with my own.  So I did what any logical person would do, I decided to take another!  One difference between a normal person and someone who battles infertility is the number of pregnancy tests that they keep on hand at all times.  See, I buy mine off Amazon.  They’re the simple clinical kind, not digital or anything fancy, so they’re really cheap.  I decided to grab a handful of the tests, 14 to be exact, and dip them all at the same time.  That was all I needed…14 tests that all clearly read positive. 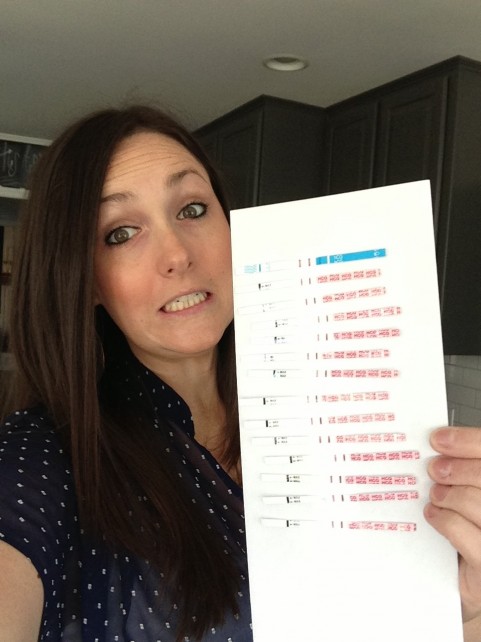 Yeah, I’m terrified.  I’m happy.  I’m scared.  I know we’ve been trying for this for quite a while now, but what did we just get ourselves in to?!?!

4 responses to “Infertility no more – part 1”