House hunting is such a weird process.  I’ve been dreaming and browsing houses since the 2nd month I was married.  That was also the 2nd month in to our one year apartment lease. I’m obviously not the most patient person…I just think of myself as a dreamer and a planner.

About 2 months ago Alex and I began getting serious about looking at houses.  I learned very quickly that my dream house was not Alex’s idea of a dream house.  Is it sad to say that it was heart breaking each time I found a house I “loved” and Alex flippantly dismissed it because he didn’t think it was anything great?  Ouch.

The ups and downs of house hunting rose again to a big up last Thursday when I found a house that was a jewel to me. First thing in the morning I told Alex that I really liked one of the new listings our real estate agent sent us over night.  I gave the warning “I know it’s old, but it’s a 2500 sq/ft ranch in a great area!”  As I expected, he wasn’t thrilled with the find.  I took it upon myself to drive by the house later that day.  I was blown away at what a great neighborhood it was in and how cute the house was. The pictures didn’t do it any justice.

Later that day we met with our agent to look at a different house and I mentioned the house I found earlier that morning.  We had time so our agent took us right over and that was it….all three of us fell in love.

Now, let me give a warning here….this house is not “finished”.  It’s like an ugly duckling that has not yet turned in to a swan.  That is the house I want–the house that I can put my personal touches in to and make things the way I want them to be without completely breaking the bank.

Here’s a sneak peak at the house (and my handsome hubs’ backside).  It’s still living in the 1980’s on the inside…that’s where I come in. 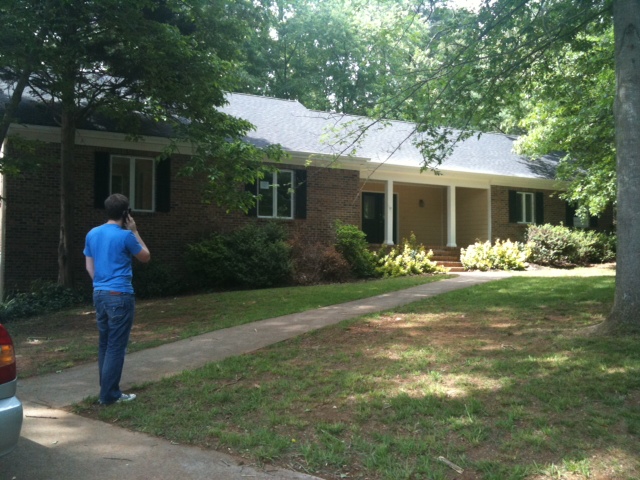 Well, I’m off to sit and wait some more.  Until next time. -EM